A space vessel boasting 23rd-century technology as stealthy and cunning as the aliens aboard it, the Romulan Bird-of-Prey is one of the most intimidating ships ever to face the U.S.S. Enterprise under the command of Captain James T. Kirk.  Although its distinctive features are powerful energy plasma torpedoes, a cloaking device rendering it all be undetectable by Romulan enemies, and a hull decorated with a colorful bird from which the ship gets its name.

Press the button on the ornament to see the Romulan Bird-of-Prey’s lights illuminate. 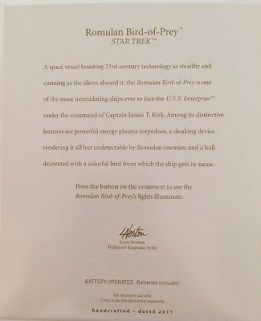