The iconic poses found in the Hallmark Legends series can be found in Trek merchandise like character standees, trading cards, figures and posters.

Many of the Hallmark Legends poses can be found in the Star Trek Quotable Notables Boxed Card Set that was first available on Amazon in 2017, the year after the final Legends ornament was released.

Interestingly, both Kirk and Sulu in the Legends series were modeled after moments in the same episode when the away team visited a Moon-sized planet.

Scotty seen holding a Trident Scanner which was used to repair power relays.

The term “trident scanner,” was first described almost thirty years later, in the script for “Trials and Tribble-ations,” where the device is apparently named after its general shape, which resembles a trident.

I’ll take some of the credit/blame for the standees deviations! In the design phase, when I was asked about Spock, I said something to the effect of, “Can we please NOT have him just standing there doing the hand thing?” And we didn’t. I remember being asked what Scotty could be doing, and I suggested his use of the trident scanner; it’s my favorite of his engineering tools. As for the Sulu deviation, I’m pretty confident the decision was made early that Kirk would be the only one of the seven brandishing a hand phaser. We did want each of the Star Trek Legends appear to be actively doing something, so Sulu got a tricorder. I mean, legends don’t just stand there!

A closer look should show that of all our Star Trek ornaments, the percentage depicting the use or display of a weapon is pretty low. By my (quick) count, it’s only nine:

We prefer not to show weapons in our Star Trek ornaments but we will when we feel it adds to the storytelling aspect of a design. Note that in 2018, the Kirk design released that year by Hallmark Ornaments substituted a communicator for the phaser he typically carries in that stance of his Quogs design, a move that was intentional on our part. Not familiar with Star Trek Quogs? Check out this link from 2009—you’ll even see the greeting card we did with them. 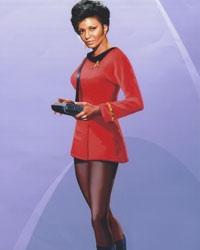 While most recognized as a communications officer aboard the U.S.S. Enterprise, Nyota Uhura proved herself skilled as skilled and dependable in performing a variety of functions on the starship’s bridge. Captain James T. Kirk frequently relied on her calm demeanor and sharp intellect for important missions away from the ship as well. In her off-duty hours, Uhura was well regarded among her Enterprise crew mates as an accomplished singer who took great pride in her African heritage. 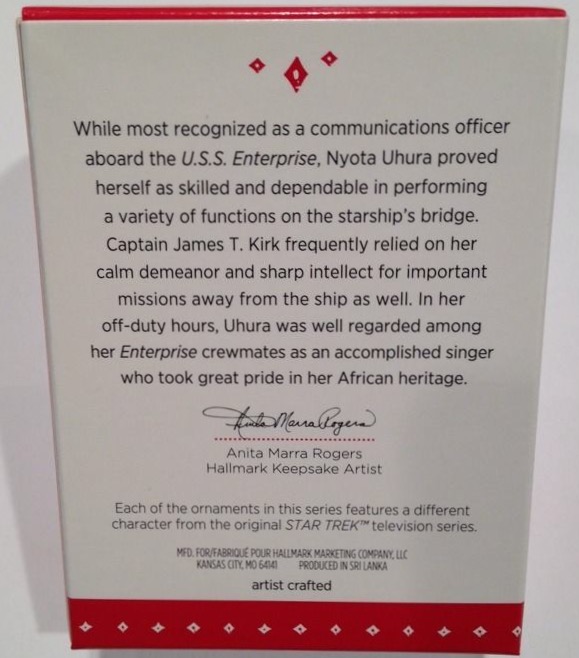