Preorders are beginning to show up with regularity on eBay for the 2016 Enterprise that premieres at the San Diego Comic-Con from July 20-24. 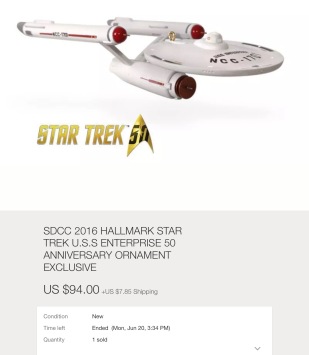 Once the public actually has their hands on these ornaments expect prices to drop a little in the short term with a bounce in value next year.

No word yet on how many will be produced in this limited run.  It is scheduled to be available at two other conventions later this year.
Star Trek: Mission New York – September 2-4, 2016
New York Comic-Con – October 6-9, 2016

Multiple convention releases is something that Hallmark has not done in the past with the same ornament but even with higher availability, the original Enterprise as a visual “hallmark” of the series, will still prove to be long sought after in the coming years.